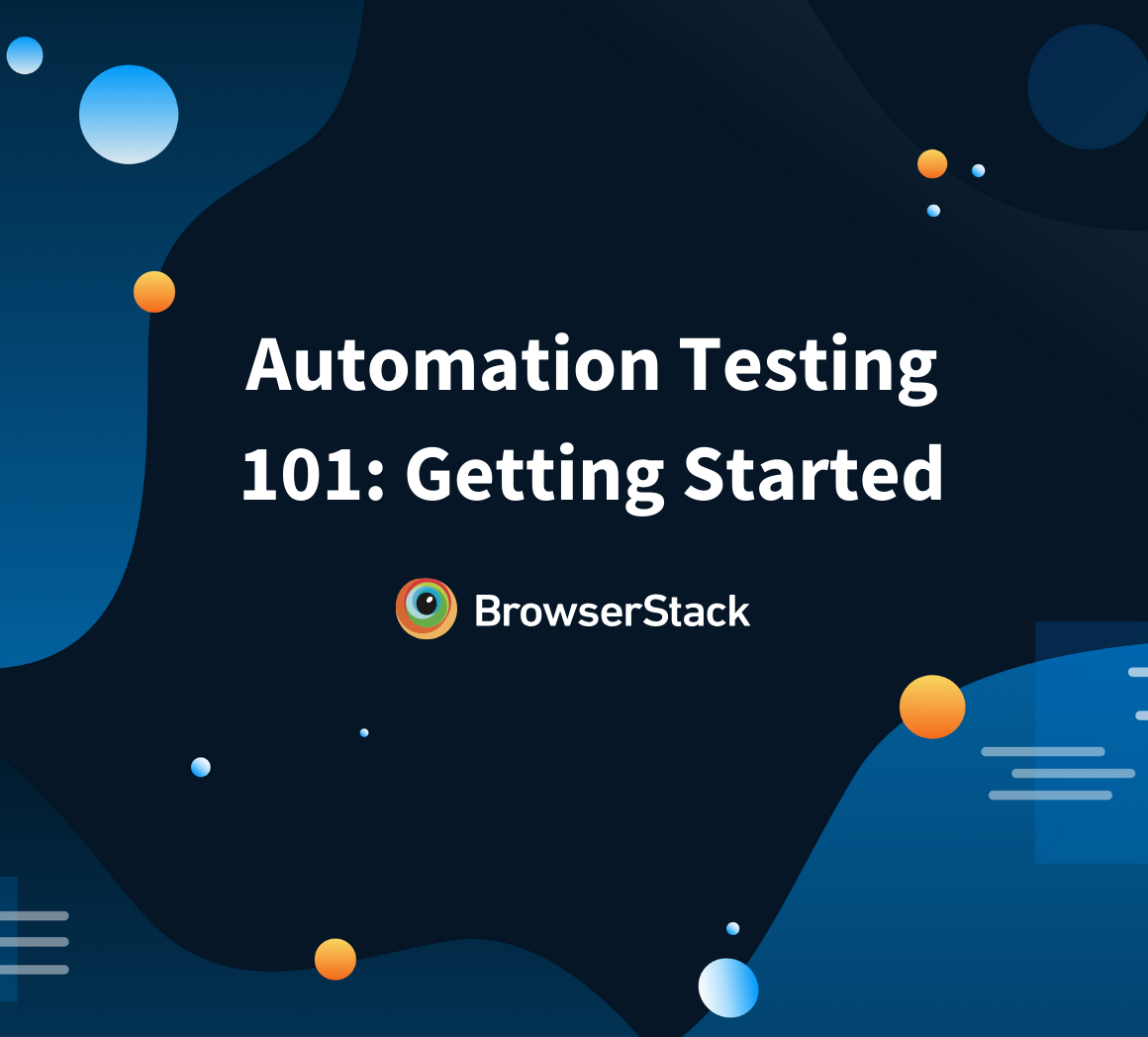 We all know that automation makes life so much easier. Test coverage is increased by automating the testing process as compared to manual testing. This leads to higher software quality and greater value for the test process. However, many people do not utilize automation testing adequately due to their lack of knowledge and understanding of the subject matter.It can, in turn, cause far more problems than it solves.

Before you begin automating your software testing, you should make sure that you understand a few key points to ensure your software product produces better results and increases productivity. Before starting automation testing, here are some useful yet simple tips that will help you in case you are planning to switch from manual to automation testing.

We would start from the basics of testing first.

What Is Automation Testing?

A software testing method known as automation testing uses sophisticated automated testing software tools in order to implement techniques in a test case suite. However, manual testing requires a person to sit in front of a computer and meticulously run the test procedure. Test data collected by an automation testing program can also be fed into the system under test, the predicted result can be compared to the actual result, and complete test reports can be generated.

Though, software test automation requires a large investment in both financial and human resources. During subsequent development cycles, the same test suite will need to be repeated. A test automation tool can be used to record and replay the same test suite as needed. Once the test suite has been automated, no human intervention is required. Automating test cases decreases the number of tests that are required to be executed manually, not eliminating them altogether.

What Is Manual Testing?

The purpose of manual testing is to find bugs, faults, and defects in software applications without utilizing automated technologies. It is a kind of testing in which test cases are run manually by a tester without using automated technology. Testing software manually is one of the most fundamental methods of detecting critical problems in software.

10 Things to Consider When Transitioning From Manual to Automation Testing

Let us now have a look at some of the crucial points one must consider before option for automation testing.

It’s important to automate all tests which you are confident will reduce workloads. Some tests cannot be automated. Some automated tests will fail to detect any issues that exist. The regression test can be automated. The whole program must be checked when new code is added to verify that it does not break any existing features. This regression test is automatable. As well as being vulnerable to human error, tests requiring large amounts of data should be automated. By automating the tests, you can simulate how the program will perform on various operating systems and browsers.

In addition to the time, money, labor, and equipment necessary for bug testing, manual and automated testing all consume significant resources. Therefore, an effective test that identifies all problems and accurately assesses how the app functions is less expensive eventually. Even though the initial cost of integrating automation tests is high, if there is a lot of testing, a lot of regression work, and several test cases, then it pays for itself

Online games and web applications are more susceptible to this. If thousands of people visit a web application at the same time, specific types of errors are more likely to occur, and these types of errors can be more difficult to reproduce during testing. In order to determine your program’s carrying capacity, automation can help you create the required number of users.

In today’s world, most testers have a basic understanding of coding. Learning a programming language can be a plus if you decide to use an automation tool. Automating technologies now support a wide range of programming languages. Thus, it is advisable to upskill through studying programming languages like Java and other languages that can be operated across an extensive range of technologies. Today, there are many options for learning how to code online, including YouTube, Coursera, Udemy, and others. A current trend is to livestream coding courses and tutorials, which makes learning how to code more interesting and entertaining.

The key to successful bug discovery in a test automation scenario is a well-thought-out and well-designed test case. If the test case has not been well planned, it will be useless. There are different types of test design processes. The Black Box approach is the most commonly used. Boundary Value Analysis (BVA) is utilized in this method. An input value that is at the very edge of an input domain can be tested for its interaction with the application using this technique.

Equivalence partitioning (EP) allows us to divide values into classes so that we will not need to verify all of the values at once. If there is a huge number of values to be checked, we can use EP to divide them into classes. Another black box technique is Decision Table Testing. The purpose of this testing is to determine whether all the conditions necessary for the desired result have been met.

The rigidity of automation testing makes it detrimental to the app’s quality. A manual tester takes into account the app’s previous flaws and tests it logically. In the case of social media firms that introduce new search functions that allow consumers to locate their friends using their phone numbers, let’s say they introduce a new function. It is just important for manual testers to know whether the cell phone numbers should be typed with the country code or not. To see if logical testing can be automated, the manual tester’s logical testing can be incorporated into the test case.

You may end up with extraneous overhead if you fail to automate or over-automate. Tests become obsolete as software requirements grow, new features are introduced, or platforms become obsolete. Inefficient testing suites should be plugged by checking the test value frequently.

Testing automation is sometimes done solely for the purpose of automating. Certain tests may require automation testing, but their value, scope, or expiration date might not justify the use of resources or time. Thus, automation may cost more or be equal to manual testing in terms of cost.

In cases like this, test automation cannot correct inadequacies in an organization’s testing process. In such cases, it can simply produce poor results. Be sure to determine the estimated results you want to achieve before automating testing. Also, verify that both the testers and developers understand the deployment effort before you begin automating testing. In order for automation testing to be successful, you must be aware of its capabilities and be able to utilize it effectively.

The importance of automation testing must soon be recognized, and additional opportunities for automation should be identified, especially within the development team. As an example, a testing framework can directly enable unit testing within existing development IDEs, which are integrated with error reporting systems. It is also significant to maximize the opportunities for automating collaboration between coders and testers.  You can start automating right away! Now that you have the right mindset, powerful tools, and knowledge to get started with automation, you can get started!

In order to learn from your mistakes, you should plan your test cases so they align with your business workflow. You will encounter challenges along the way. In addition, you should keep the same mindset as you do when automating your tests as you would when performing manual tests. As a quality assurance professional, your focus must be on how the user experiences the product. After all, that is the whole point of quality assurance!  It is essential that you learn how to manage test data. In addition to this, it is also vital  that while the team executes tests through automation, you should keep track of the test results — both for successes and for failures, so you can learn from them as well.

LambdaTest, you can quickly perform cross browser testing with high-end automation on the cloud, allowing you to speed up release times. For web testing and app testing automation, it supports a wide range of frameworks and tools, such as Selenium, Cypress, Taiko, Playwright, Espresso, Puppeteer, Appium, and XCUITest.

LambdaTest has all the features you need to run your tests on the platform. You can also track and figure out problems and resolve them. It can all be done in three steps.

What Is An Anonymous VPS Hosting?

The need of Cybersecurity Managers

A UX design agency’s responsibilities – How can they help my business?

How V-Ray 6 can level up your 3D designs

How To Decide The Perfect Halloween Costume

Should You Buy Kaspersky Security Products?

Do You Know Which Passport Is Best for You?

Everything you Ought to Know About Current Technology Advancements