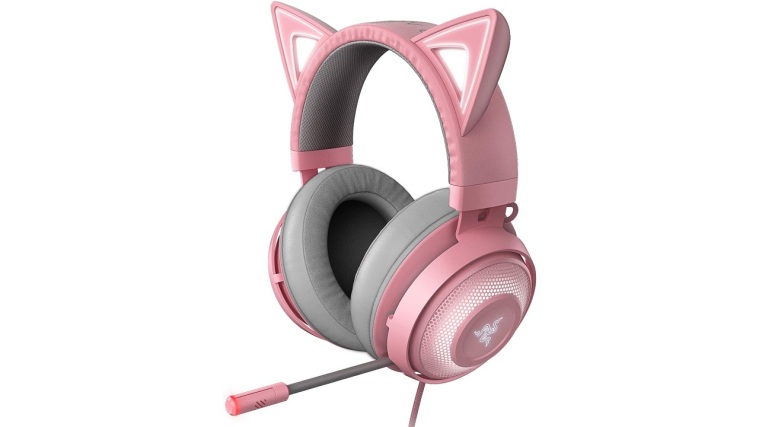 The Razer Kraken Ultimate is the company’s flagship wired gaming headset, offering loads of features like programmable lighting and simulated surround sound, along with powerful bass response and an excellent microphone. There’s one Kraken model that offers just a bit more, providing an exclusive extra feature for $20 extra. That feature is a pair of glowing cat ears, found on top of the $149.99 Razer Kraken Kitty Edition. It’s a Kraken Ultimate with a reasonable premium for its cosplay appeal.

Below the headband, the Kraken Kitty Edition looks just like any other Razer Kraken headset. Available in black or pink, it features large, circular earcups emblazoned with a glowing Razer logo on the back and large, soft, faux-leather-wrapped earpads that easily cover even large ears. A 4.3-foot, fabric-wrapped USB cable is hardwired to the bottom edge of the left earcup, while a volume wheel and a button to enable THX Spatial Audio sits on the back edge of the same earcup. The boom microphone is also mounted on the left earcup, and is a cylindrical plastic capsule mounted on a flexible arm that retracts directly into the cup. The capsule can be clicked like a button to mute it, and lights up red to indicate it’s muted.

The headband is where the kitty part of the Kraken Kitty Edition comes into play. The headband itself is fairly typical, with faux leather along the top and fabric-covered padding on the bottom edge, except for the two big, plastic cat ears that extend from the top. These ears are permanently attached to the headband and feature built-in multicolored LEDs just like the Razer logos on the sides of the headset. Like other Razer headsets with colored lighting, the ears and Razer logos can be programmed in the Razer Cortex PC software to shift between whatever colors you want at your chosen pace. They’re certainly eye-catching, lending an unmistakable feline silhouette to the wearer.

Test failure analysis is the key to prompt CI/CD

What are the best smm panel services?

How To Use Digital MediaTo Sell Ice Cream In China

Why You Really want SEO Services

Tips To Find The Best iPad Rental Company in UK